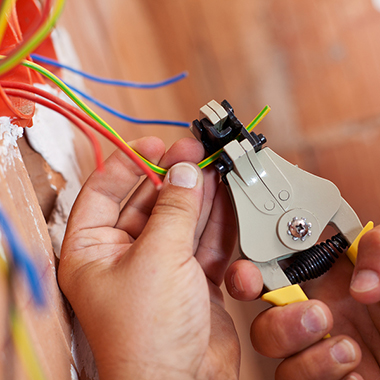 Posted by Kaiden Douglass on in Engineering

It was a dark and stormy night.

As you’re lounging on your couch, relaxing from your workday, everything goes black.  No lights, no television, and no margarita machine.

Power outages occur from time to time in different spaces, but thanks to electric codes (and smart engineering) lighting can be restored and safety ensured in commercial environments.

Emergency lighting is required for almost every project in which TES Engineering participates. The National Electric Code requires emergency lighting for safe exiting and panic control in any space of assembly that can be occupied by a large group of people. Components of this lighting include egress lighting, illuminated exit signs, and other lighting necessary for safety.

The National Fire Protection Association requires emergency lighting to be maintained for a minimum of 90 minutes uninterrupted.  International Building Code requires that an average of 1 foot-candle and not less than 0.1 fc be maintained on the path of egress.  In order to comply with all of these code requirements, some emergency power source must be provided.  The most common emergency power sources include generators, inverters, and integral battery packs.  Since generators are large, noisy, and require additional ventilation, many commercial spaces opt to use integral battery or inverter systems.

Integral battery systems involve designing exit signs, egress fixtures, and emergency fixtures with individual battery packs. Integral battery systems are the most popular systems because exit signs, egress fixtures, and emergency ballasts come as a complete package, are very easy to wire, and contain batteries that will charge themselves.  In this system light fixtures designated as emergency are wired ahead of switching to area lighting circuits.

Individually, the fixtures are cheaper; however, once the number of emergency fixtures starts to rise, the cost goes up.  When the battery dies, most times the entire fixture/unit must be replaced.  Each unit also requires yearly testing.  Pendants, chandeliers, or any type of customized fixture generally do not have emergency ballasts available.  This means that the tenant will instead need to install more “bug eye” egress fixtures, which are not aesthetically pleasing.

Many of the problems that occur when using integral battery systems can be avoided by including an inverter system instead of individual battery packs in your project design. This inverter system contains a central bank of batteries, a battery charger, an inverter, and a sensor.  When the normal power is on, the inverter is bypassed, the battery bank is charged, and the circuits wired to the inverter only see normal power.

Using an inverter system allows any type of fixture to be designated as emergency and allows the full output of each fixture to be used when power is lost.  Inverter systems have a larger upfront cost and the batteries will need to be replaced every 5-7 years, which can be quite costly. They also tend to be quite large (depending on power requirements) and require space for them near the electrical panels.

Individual battery pack systems are excellent for small spaces, however, inverter systems are best used in large open ceiling spaces that contain a wide variety of fixture types and will require a large number of emergency fixtures. Either way, it is our goal to provide you with the exact electrical engineering you need. Contact us today to discuss your project.