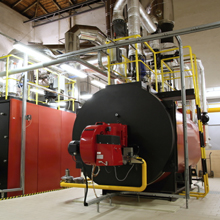 Mechanical Engineers: The Interior Designers of Equipment and Boiler Rooms

Posted by Eric Baluch on in Engineering

As mechanical engineers, we are frequently involved with boiler room equipment layouts. While fitting modern equipment into an antiquated space may challenging for some engineers, our firm rises to the challenge to create a design that is maintainable, serviceable, efficient and clean.

Much like furniture in a living room, each piece of equipment in a boiler room (including the boiler, expansion tank, pump, feed valve, and air separator) has a unique function and requires expert placement in order to operate properly. Furthermore, equipment operation is highly dependent on water temperature and pressure (there’s a different temperature and pressure at every point in the system), which is why the location of each piece of equipment is crucial in designing a successful hot water system.

The point of no pressure change: PNPC

How does the PNPC affect the boiler room design?

If a pump is placed so that the discharge side is pumping to the expansion tank (PNPC), the pump will lower the pressure on its suction side because it cannot change the pressure at the expansion tank. If this occurs, the system pressure can become so low that air will want to enter into the system any way that it can. A system with a lot of air dissolved in it can cause damage to components and piping, cause noise in the system, and require frequent bleeding of terminal equipment.

If a pump is placed so that it is pumping away from the expansion tank it will add its pressure differential to the discharge side of the pump, again, because it cannot change the pressure at the expansion tank. With a higher system pressure, air is less likely to enter the system and cause problems. With a low system pressure, air is more likely to get trapped at high points in the system, instead of staying dissolved in the water where it can later be removed by the air separator.

Other pieces of equipment in the design

The air separator is responsible for removing air from the system and its location in the system can change how effectively it performs this task. Air is removed from water most easily whenever the air is in a gas form and not dissolved in the water. Water can keep more air dissolved in it when the water is at a low temperature and when the water is at a high pressure, so the best place to locate the air separator is at the location in the system with the highest temperature and the lowest pressure. That location in a boiler system is after the boiler (highest temperature) and before the pumps (lowest pressure).
Correct placement of each piece of equipment in a boiler system will ensure that equipment operates optimally, increases the effectiveness and lifespan of the equipment, and decreases the need for maintenance.

As mechanical engineers, boiler rooms are our hangouts – our living rooms – and we’d love to help make yours better. Send us a note and say hello!